Full circle… Ryszard Litwiniuk first exhibited at Galeria EL twenty five years ago, and now again, he presents a full spectrum of works realized during this period. Living in an era described by some as the anthropocene, where humanity’s presence actually transforms the weather and climate systems as well as the physical topography of our earth, requires a reassessment of nature as medium, as backdrop for human activity. In one way, this directs us to look as Ryszard Litwiniuk’s transformative sculptures from the point of view of a nature increasingly categorized, quantified, indeed measured, while nature’s systems involve procreation, inimitable reproduction, and so the inter-textual play between man and machine, between procreation and manufacture we see with Litwiniuk’s art is incredibly relevant to our times. His interaction as a sculptor is human, textural, and tactile, involves physical dimensionality, and plays off beautifully within the context of this restored Dominican Gothic church that became a nexus point for art exhibition and publication in Poland initiated in 1961 by Gerard Kwiatkowski, attracting such sculptors as Magdalena Abakanowicz and many other artists for their Biennial of Spatial Forms (begun in 1965), who would later become “names” in the art world.

Notatnik Robotnika Sztuki, Poland’s first art publication of artists’ ideas, projects, in the early 1970s resembles New York’s Avalanche Magazine begun by Willoughby Sharp, who presented the first Earth Art show with Robert Smithson, Dennis Oppenheim, Jan Dibbets, Richard Long, Hans Haacke, Michael Heizer and others, at the Andrew Dickson White Museum of Art at Cornell University in Ithaca, New York. The spirit of exploration, of invention and open access was in the air, so to speak, and Gallery EL led the way…

The direct exchange between the steel industry and contemporary art, where workers actively helped produce artworks at Zamech Mechanical Woks and at Gallery El and in the city of Elblag was quite unique. It encouraged a dialogue on the nature of work, of culture, and what “value” really is.

To address humanity’s place in history, and to do so with wood – a simple material – associated with sculpture for centuries, is an act of faith, particularly in an era where the “end of history” has been so aggressively pursued and encouraged as a theme and concept in art…. As the writer D. H. Lawrence once wrote:

Our vision, our belief, our metaphysics is wearing woefully thin, and the art is absolutely threadbare. (…) We’ve got to rip the old veil of a vision across, and find what the heart really believes in, after all: and what the heart really wants for the next future. And we’ve got to put it down in terms of belief and of knowledge. And then go forward again, to the fulfillment in life and art.

Ryszard Litwiniuk’s wooden mechanisms are human-scale. They are awkward, nature machines, and they function as indeterminate embodiments of process, of exchange between nature and culture, a system as ancient as it is often unrecognized. Scarecrow (1990-1991) and Walking (1990-1991) with their intertwining of cogs and wheels with wood, are every bit as symbolic as Man Ray’s sculptures, and hieratic, symbolic; they express a pain, something that goes with the life-death situation we all live with. Here, it seems to hang in front of our eyes like a presence, this calm of nature – the texture of wood – and this implicit violence of the machine… The two obligingly co-exist in a pre-digital era….  The sculpture is the body in Torso II (1997). The tree is the body as well. The early sculptures are metaphors for the man-machine interaction and were inspired in part by watermills and windmills that can be found in the flatlands of the Elblag region of Poland, where Dutch settlers helped drain the land and create drainage systems earlier on. Litwiniuk is a ferocious shape shifter, bringing a metaphorical language into his sculpture, whose kinetic and spatial play, mimics the way nature procreatesahistorically, unconsciously, as if we were in an immeasurable TIMEFLOW.  The King (1992) and The Queen (1992) are majestic anachronistic gestural works and the human component is inseparable from the natural. Natural and Cultural. And so the patterns and flow lines we see in the wood, even the chainsaw marks on the surfaces, open up a sense of our interaction with nature, and the geometricized sections, one within the next, embody an aesthetic of the immeasurability of energy – pure and simple.

Art, like life, can never ultimately be measured! Litwiniuk’s works challenge and transform conventional aesthetics, for they do not ultimate “contain”, though individual elements within them resemble mechanically produced “containers”. The artist is a medium moving in and through the conventions of form, but the artworks include their surrounds, the environment of this Gothic church, and play off it. One thinks of Kurt Schwitters’ awkward Merzbau constructions, so many reclaimed and re-categorized elements as environment cum architecture. Litwiniuk instead “finds structures” and then gives them a new voice, by transforming their context, introducing a narrative to it all… And so we are no longer in an era where “progress” is defined by structure, instead “process” and dialogues with nature’s entropic systems become a relevant artistic action. And so to witness the decayed, decomposed fragment of earlier Litwiniuk artworks suspended in space at Gallery EL, is to realize that art, like we are, is ephemeral part of a huge scale of process in time. And this is evoked in all of Ryszard Litwiniuk’s artworks over time.

Arenga (2015-2017), a recent floor installed sculpture consists of two open forms, repeated in ever smaller or larger scale. The two sections of sculpture parts face each other directly. Litwiniuk comments this sculpture was inspired by a Papal Bull, that the sculpture elements resemble the pages of a book, each element one page. The “story” of each element exists with its own “language”. The sculpture recalls the story of an Amerindian tribal speaker I met in British Columbia who once commented in the Squamish Valley, “The trees are our books, and the forest is our library.” The implication is that knowledge exists within nature itself, uncodified, as a library of life, so to speak.

Two Towers (2015) rise up epigrammatically as wooden structures whose forms rise up, and their process is again awkward, with junctures between each section held in place by metal rods (the interaction between nature and human, or art and industry). One is reminded of early stone sculpture environments, the vertical intention of the human gesture in ancient times, reaffirmed here, but enigmatic, hard to truly “read”. The abstract merges with the figural, and we are led to question presence and absence.  Living or dead? Containers or consciousness? Time flows. Litwiniuk’s retrospective at Gallery EL is a performative ritual, and the sculpture evidence of the temporal point of existence, manifest by machine cogs and wheels, sectional growths and abstract projections, all expressions of the creative impulse at a point in time. This point in time, where time itself unconsciously performs its process, while the artist performs his process – the evidence of these rituals of existence are these artworks –  Open System –  … Dot Dot Dot …

Edited by Bożena U. Zaremba 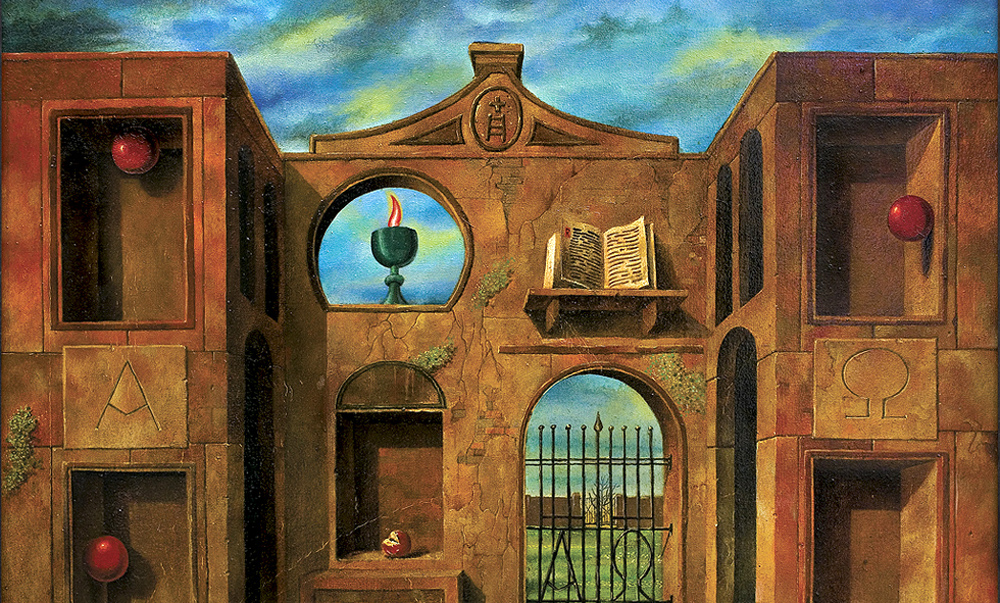 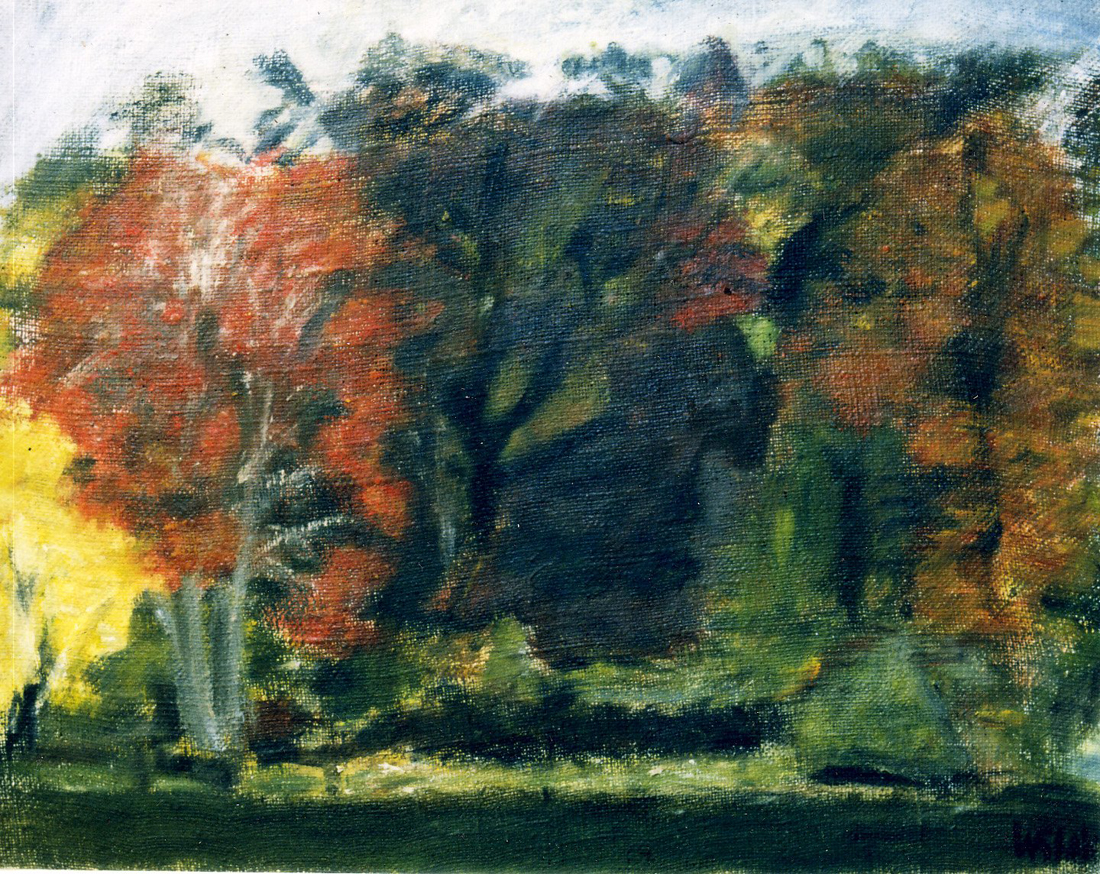